Group of five original World War 2 court mounted medals attributed to 155111 Flight Lieutenant Frederic William Woodruff MBE, RAFVR, No. 264 (Madras Presidency) Squadron, Royal Air Force Fighter Command. The group consists of The Most Excellent Order of the British Empire (Member, Civil Division); 1939-45 star; Aircrew Europe Star with France & Germany Bar; Defence Medal and War Medal. All medals are in Extremely Fine condition mounted on contemporary silk ribbons. The recipient was a Navigator on Mosquito Fighter Bombers, flying over 60 operations defending the British Isles and attacking targets in occupied Europe from May 1943 to November 1944. His aircraft was shot down by flak and crash landed near St.Nazaire in September 1944. He successfully evaded capture with his pilot, F/L W K Moncur, hiding with the French resistance before returning to England. Included are the recipient’s original framed RAFVR Commission document dated July 1943, his original framed MBE award Certificate dated 1964 (Chairman of Preston RAFA Club) and a framed print of a Mosquito fighter in flight by aviation artist G. Coulson

This is what was found on the Internet by David Moncur. How his father and his navigator escaped after their Mosquito Mark XIII crashed…

On 19th September (1944) at four in the afternoon a Mosquito aircraft flying low came down hard (crash landed) in a field of cabbages in the village of Langatte at La Chapelle des Marais. I hurried to the aid of the airmen. I hid them beneath an apple tree whose branches hung down almost to the ground in a ditch covered by brambles. Shortly afterwards the Germans accompanied by police dogs tried without success to find them in the area around where the airplane had come down.

The next day, accompanied by Richard Wright and Généreux Gautier (of the Resistance) I went to bring them something to eat. Armand Moyon and Généreux Gautier led the two Englishmen dressed in civilian clothing and carrying tools across the marsh as far as the canal of La Chapelle where Gautier’s barge was located. This man led them into the middle of the Brière (in the words of de Moyon )

The two airmen, Lieutenants Woodruff and Moncur, were hidden for a few days in a reed hut. Since the reeds around them had not been cut, one could move around without being seen at ground level. But the two Englishmen scarcely moved from their hiding place fearing that they would be seen by German airmen who would ask themselves why this stack of reeds was inhabited (Interview with Richard Wright )

Boceno, Meignan and myself, all three of us FTP, took charge of them at Pont de Pandille and brought them by bicycle as far as Prinquiau (Interview with Jean Morice)

Le Contel managed their crossing of the last lines as far as Lavau for embarkation. For two days the Germans had been carrying out surveillance opposite Cordemais. The smuggler René Moyon et Florentin Bertreux carried Le Contel and the two airmen over to the Île de Maréchale then from there to the south bank of the Loire. After passing the night at Frossay in no man’s land, the three Frenchmen crossed the lines as far as Buzai and met up with the FFI who led them to the American military staff in Nantes.

This is Flight Sergeant Thorn and Sergeant Barker. 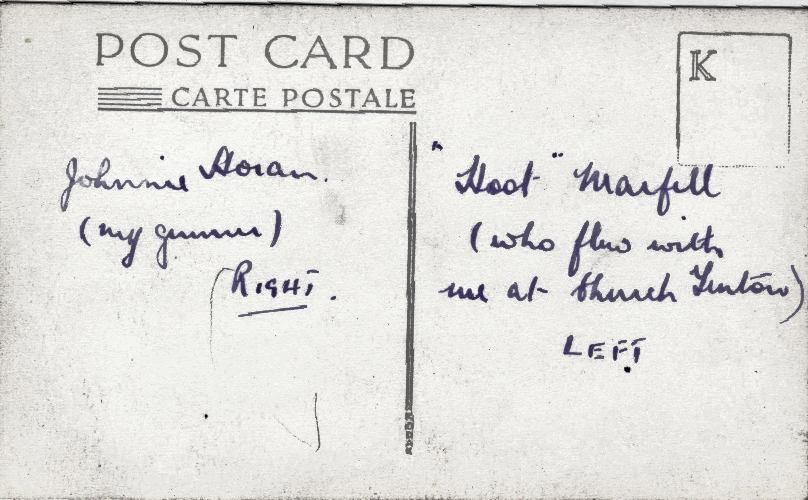 I wonder who took this picture of John Spencer Horan and the other airman?

Was it Flight Sergeant Gérard Pelletier who took it when he was  with 264 Squadron ?

To be continued in September… 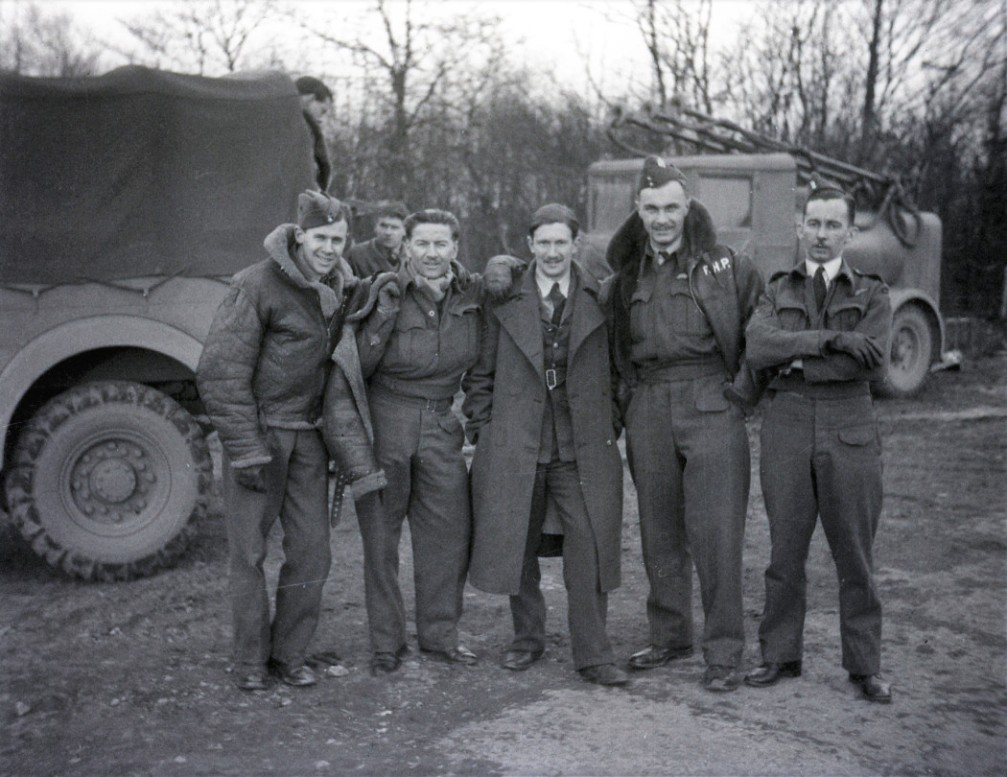 Every little clue helps in finding who these 264 Squadron Defiant pilots were. 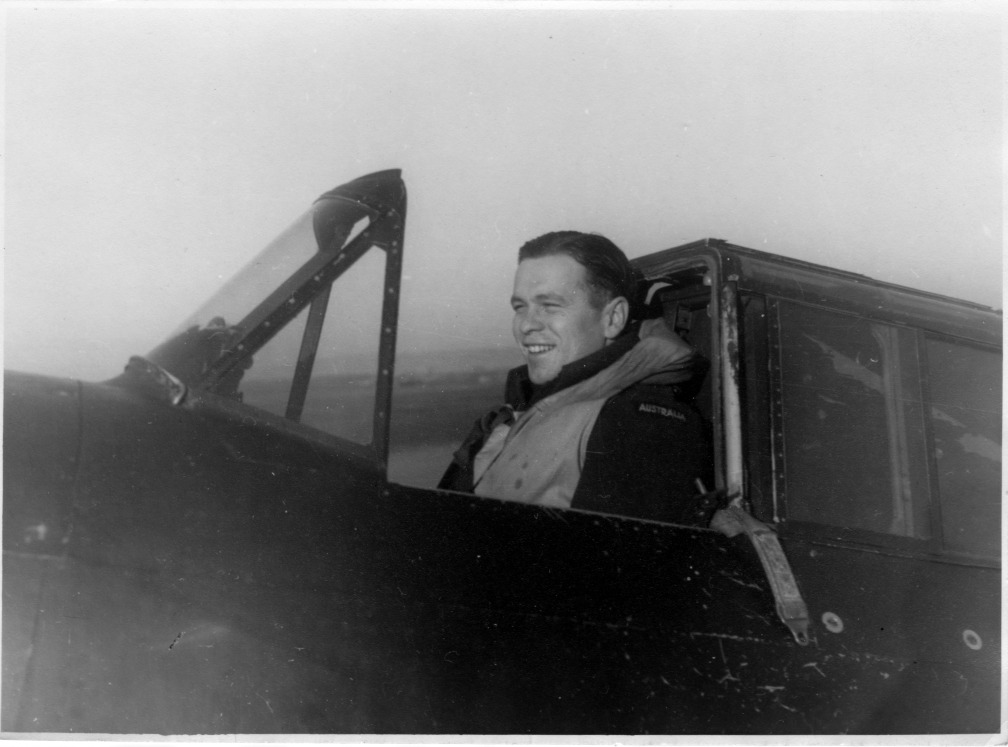 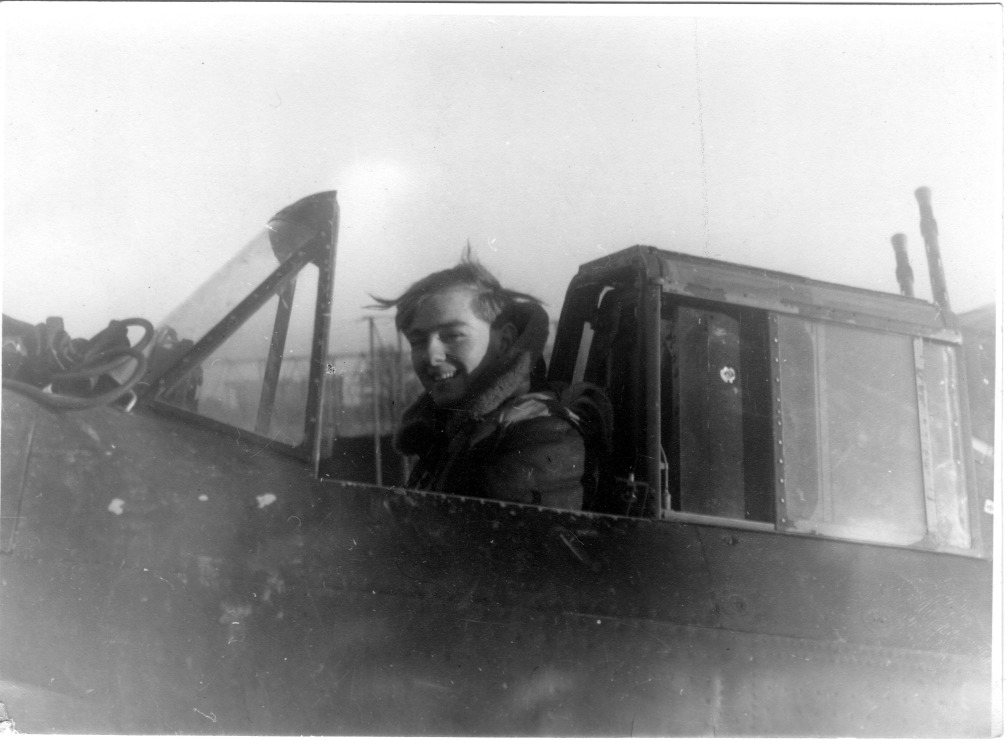 Two 264 Squadron Defiant pilots’ names on photographs from the collection of Flight Lieutenant William Kerr Moncur might never be found.

These photos have never be published on the Internet for all I know. This is why David Moncur’s contribution is so important for preserving the past like the contribution of Gérard Pelletier’s niece who had shared all of her uncle’s photo album.

Two 264 Squadron Defiant pilots’ names on photographs from the collection of Flight Lieutenant William Kerr Moncur might never be found.

Unless… we look for them on these pages. I got more emails from David Moncur yesterday…

Ready when you are!

Attached are some more aircrew photos. :  lineup  of  264 pilots taken on October 23 1944 ;  two unnamed  264 pilots in Defiant cockpits ;  two unknown but fine looking gentlemen (no idea when or where these were taken) and  groundcrew refuelling Spitfire (might be good to colorise?) – no details of when or where this was taken either but on the reverse it says it came from Chichester Photographic Services so probably one of the Sussex airfields 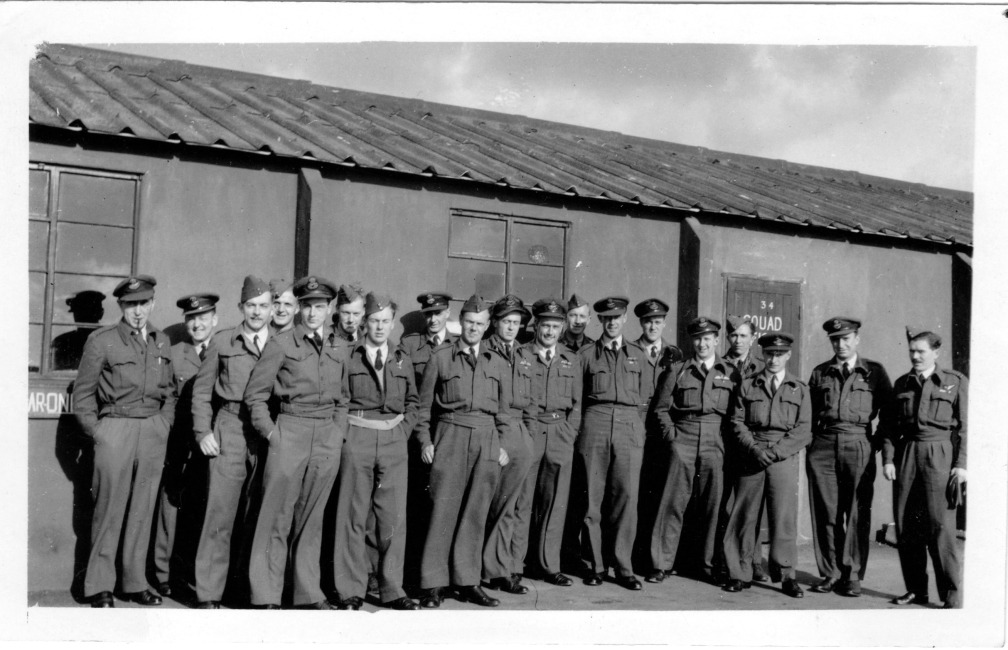 Last April I had been trying to make contact with William Moncur’s relatives with the intention of sharing some photographs that were in Flight Sergeant Gérard Pelletier’s photo album.

This is how this search for William Moncur’s relatives began. He was just a name in a caption under a photo.

As usual I went scrambling on the Internet to find more about who was William Moncur. Someone had written on a forum that William Moncur was a Free French pilot. This got me all excited since my youth hero was Pierre Clostermann!

But maybe I had been too quick to jump to conclusions.

William K. Moncur was not a Free French pilot. The information I had taken from the Internet was false. 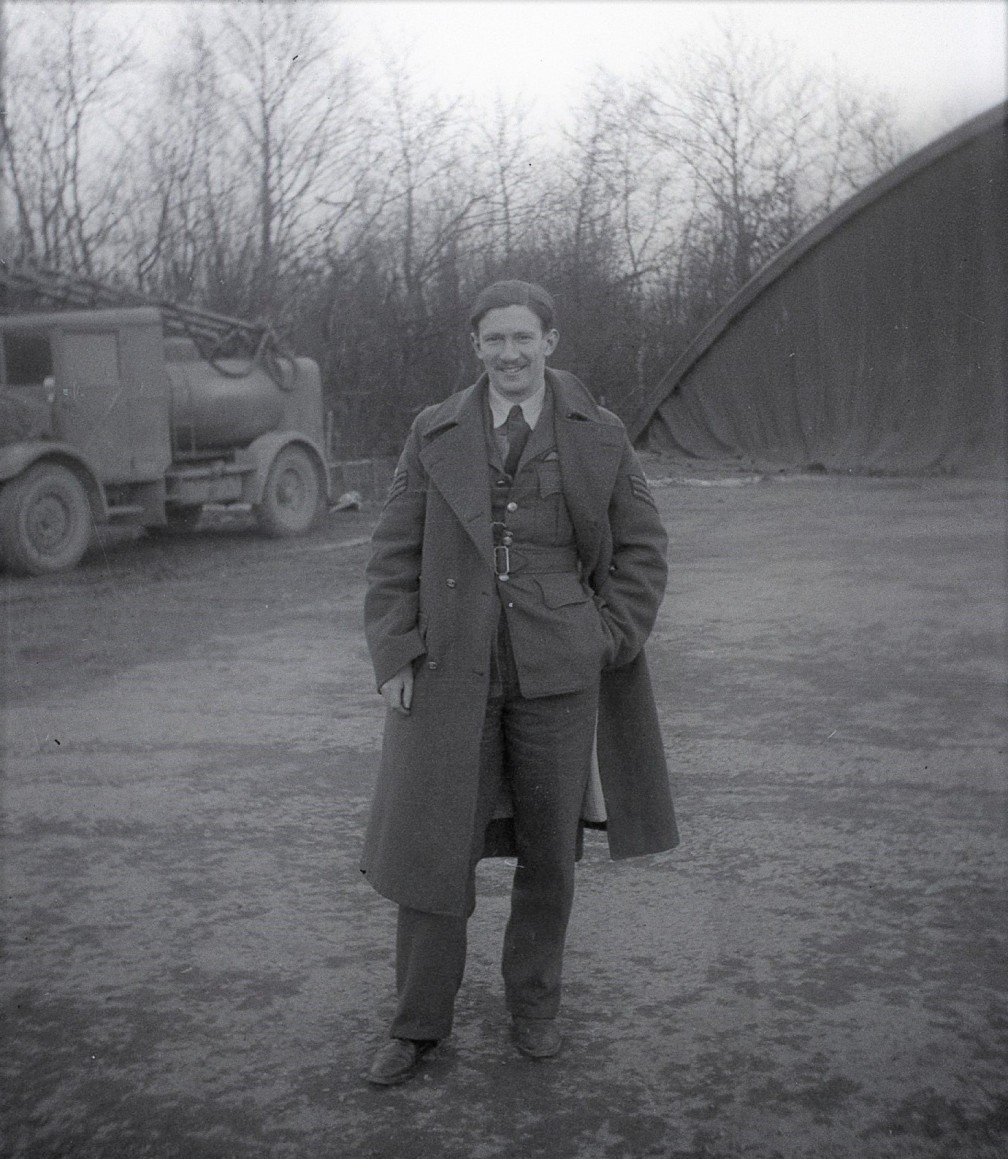 This was the proof right here on a top secret document about the debriefing of Flight Lieutenant Moncur who was shot down 19 September 1944, and who had managed to escape with the help of the Résistance. Someone had provided me with this Top Secret report. 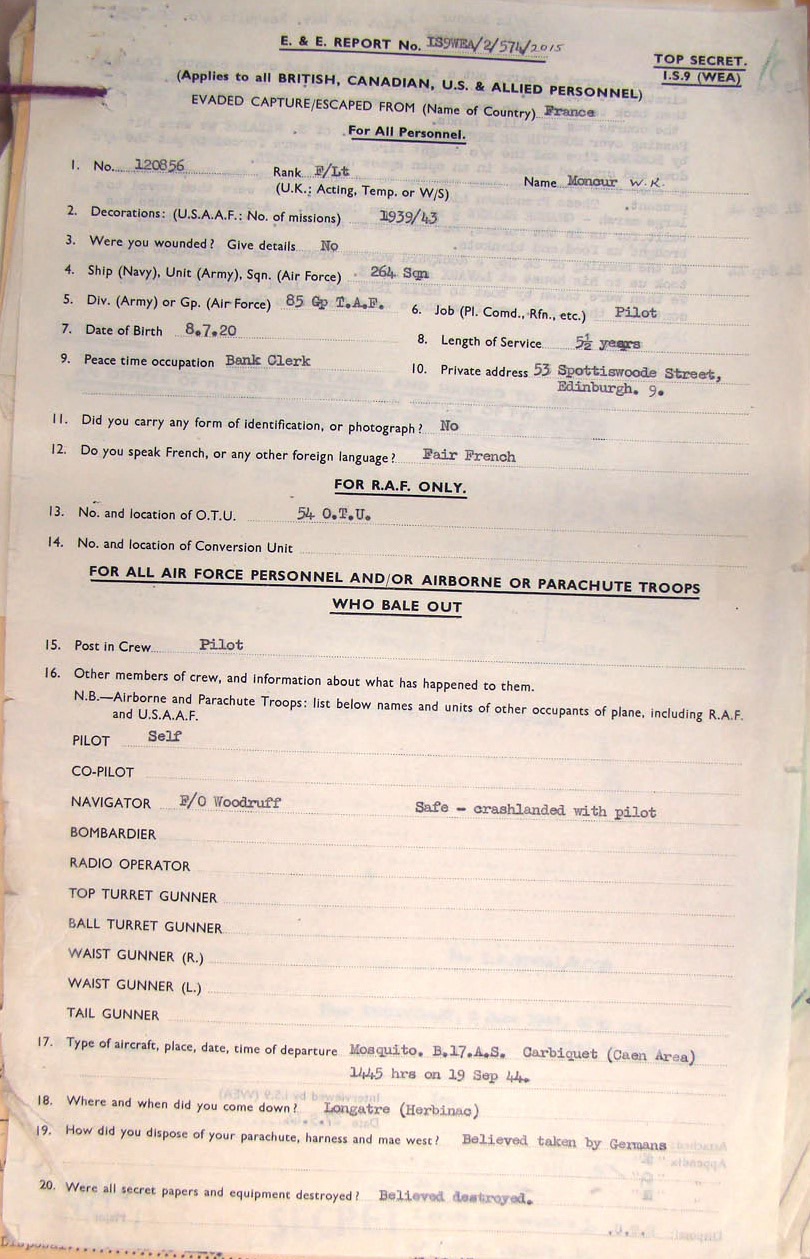 This is what got me thinking about William K. Moncur after I had read the top secret report.

To the question, Do you speak French? He answered “Fair French”.

Then I found this…

In 1955, William K. Moncur got a Queen’s commendation as part of RAuxAF.

What was RAuxAF all about?

By March 1939, 21 flying squadrons had been formed, the 20 surviving units being ’embodied’ (included) with the Royal Air Force at the outbreak of war. Notably, all enlisted men continued to serve under their auxiliary conditions of service until they expired when they were required to transfer to the RAFVR. The squadrons were equipped with a variety of operational aircraft which included Hurricanes and Spitfires. The squadrons scored a number of notable successes before and during the Second World War: the first flight over Mount Everest, undertaken by auxiliary pilots from 602 Squadron, the first German aircraft destroyed over British territorial waters – and over the mainland, the first U-boat to be destroyed with the aid of airborne radar, the first kill of a V-1 flying bomb; the first to be equipped with jet-powered aircraft, and the highest score of any British night fighter squadron. In the Battle of Britain, the AAF provided 14 of the 62 Squadrons in RAF Fighter Command‘s Order of Battle and accounted for approximately 30% of the accredited enemy kills. Indeed, in 11 Group Fighter Command, that saw the heaviest fighting over South East England in 1940, of the 15 top scoring squadrons, eight were auxiliary. The losses sustained during the Battle of Britain, as with all other squadrons, were replaced by drafting in regular and RAFVR pilots.

The Tactical Air Force squadrons were chosen to carry out several successful ultra low-level raids on key ‘pin-point’ targets in occupied Europe. The Balloon Squadrons also played their part, downing and deterring many hostile aircraft and were accredited with the destruction of 279 V1 flying bombs.

The Auxiliary Air Force was also responsible for the anti-aircraft balloon defences of the UK. At the outbreak of war in 1939 there were about 42 Squadrons operating barrage balloons, with the number of squadrons peaking at about 102 in 1944.

This next page taken from a souvenir book about the Battle of Britain I was also relying on as a proof was incorrect. 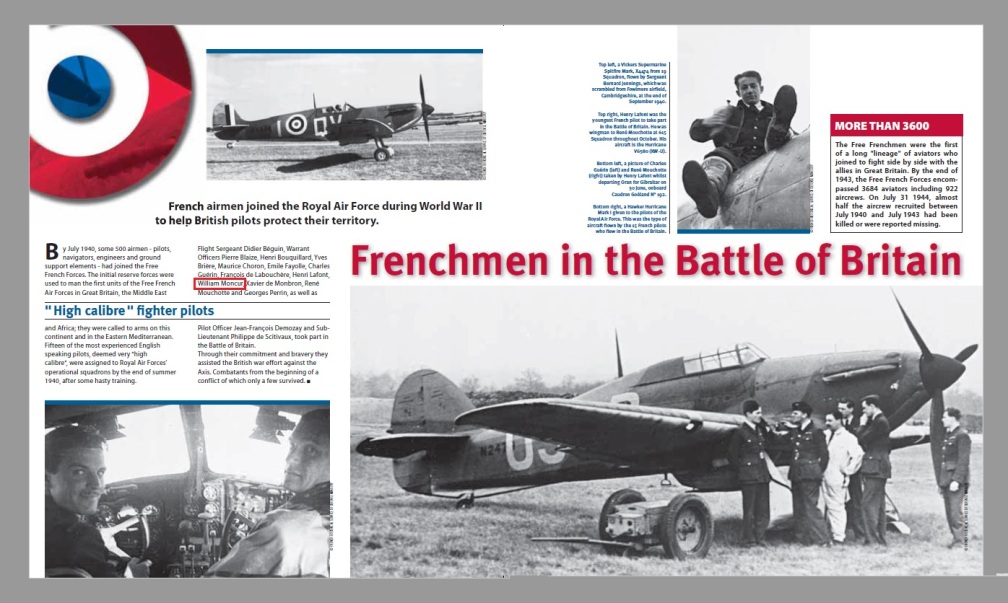 Preserving the past isn’t always easy especially for an amateur historian like myself.

Now all this being said…

What about trying to make contact with William K. Moncur’s relatives?

I was interested to come across your recent researches into the identity of the William “Bill” Moncur of 264 squadron since he was my father! I can confirm that he was definitely not French – the name, although having a slight Gallic tinge, is not uncommon in the East of Scotland where the family has been located for generations. He was certainly attached to 65 Squadron in October 1940 (so that part of the story is true) before joining 264 Squadron at the beginning of 1941. He remained there for just over a year during which time his log books confirm his regular partner in the Defiant was Sgt Horan (although he did fly a few times with Sgt Pelletier). In February ’42 he was posted to Unit 1529 B.A.T. Flight until it was disbanded in November and then after a brief period with Unit 54 O.T. U. he rejoined 264 where he remained for two years. During an Instep sortie in June 1943 he was credited with a JU88 and as you know in September 1944 was shot down over occupied territory near St. Nazaire but with the aid of the Resistance, he and F/O Bill Woodruff evaded capture. In November 1944 he was posted to the T.F.U. where he remained for the rest of the war. On his return to Edinburgh he took up a job in a bank (ending up as one of the senior managers in the Royal Bank of Scotland –when it was still a responsible financial institution!) but his love of flying prompted him to join 603 Squadron when it was reformed in 1947 as an RAF Auxiliary Squadron and remained on “active service” with it (flying Spitfires, Meteors and Vampires) until its disbandment in 1957. He died in 1995 (aged 75.)

In the process of putting together information  on my father’s flying career for the RAF Heritage Museum in Montrose (where a 603 Squadron Meteor T7 which he flew is now on display) I was searching the Internet for information about 264 squadron and was amazed to come across your recent blog post. I was fascinated (and moved) to see the photographs of him and his comrades, since, like many who saw service in the war, he rarely spoke about that period of his life. If there is any way in which I could get copies of these photos I would be very grateful as I have very few pictures of him at that time (while his post-war service with 603 is quite well documented.) I was also incredibly interested to see the record of his debriefing after the French adventure and would be very grateful if you could let me know how I obtain a copy as I am preparing an account of that incident for the Montrose museum.

Hope this information has been of use in your researches and if there is any further assistance I can give you, please let me know.